I entered into the retriever
world in 1997. when I got my first lab Artúr, a show dog from Finnish lines –
before him I had spaniels. While I was competing abroad with Artúr I saw the
qualitiy of the working-line labs and I decided to buy a labrador bitch from
pure working lines – she is Gianna of Carinthia, a wonderful bitch: she became Int. FTCH and H. FTCH by her age
of 3,5 – with a totally green trainer… I learned much more from her than I can ever teach to my dogs.

My second bitch Chance of Dukefield – a very stylish and pleasing little bitch with a lots of drive – won her Int. FTCH title in
2006. and she has won a lot of FT awards and WT placements during the years.

In 2008. I made two other dogs up to FTCH in my kennel: Int. FTCH Blackthorn Racer and GB FTCH
Blackthorn Ascella.

With the first litter of Gianna I put the down the foundations of my kennel called Blackthorn in 2005. (http://www.blackthorn.hu/) – so I always have
some newcomers to train and compete ;-). For the moment Blackthorn Ascella from the A litter is my favourite, she is a very
talented and hard-going bitch giving me a lot of unfogettable moments on
trainings and competitions. In 2008. she won her first Novice FT in England and
by winning an Open FT second time she became Hungarian FTCH. She followed her
unbelievable story last winter when in England she won 2 qualifying Open Field
Trials in a row, within a week and she became the first and only Field Trial Champion from the Continent made up
under the rules of the UK Kennel Club and she was also qualified to run on the
IGL Retriever Championship in Blankley.

I have been active in promoting retriever work in Hungary for a long time – in the past years  as one of the leaders of the Labrador Retriever Club – and I have been managing
an informative professional website – RetrieverSport on training and care of retrievers since 2001. (www.retrieversport.hu).

In the past years I have judged in Hungary, Czech Republic, Austria, Germany, Finland and Sweden – and in 2008. I had the honour to judge on a Field Trial in England!

For the moment I have 5 labradors in competition age, some youngster for the future and a cocker
spaniel – and some pups from my own litters to train for other people.

I like to train my dogs according to the hunting requirements and not just for WT or FT – so all of them can work on normal hunting
days, search under the gun-range, flush game, pick up etc. – and in the meantime they are successful in every kind of competitions, on WT as well as on
FT. The retriever is such a versatile breed, it would be a waste of their talent not to improve every inborn quality and ability which they have…

I hold regular hunting and dummy training classes in my own area near the Austrian border as well as abroad, preparing dogs and
handlers for hunt tests and WT/FT.  I train only small groups so I can focus on the individual problem of every dog and handler. My trainings are quite „technical”, I like „trial and
success” method with built-up excercises instead of testing the dogs with a lot of dummies retrieved.

I still spend considerable time to visit other trainers in England and on the Continent and take training days from them
because one can always learn and get fresh new ideas. Wintertime I spend all my spare time freezing on picking-ups where I can enjoy the result of  the
all-year-long training of my dogs.

I am really looking forward of the training in July and meeting my Swedish Retriever-friends and their dogs again! 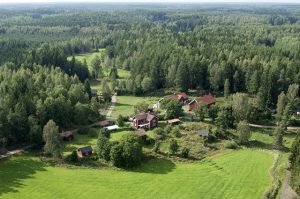